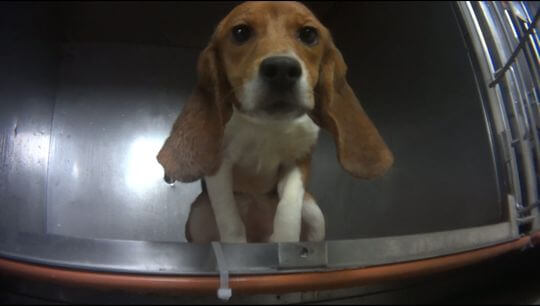 The Humane Society of the United States (HSUS) is claiming that Midland-based Dow Chemical Company commissioned a Michigan lab to force-feed fungicides to beagles for a year.

HSUS released video of an undercover investigation conducted from April-August of 2018 at Charles River Laboratories in Mattawan, Mich. The footage shows lab workers testing on multiple dogs, some who were killed when the studies were completed according to HSUS. The animal welfare organization also says that the remaining 36 beagles will be killed this July unless they are able to be released. Over 100,000 people have signed a petition on HSUS’ website demanding that the dogs be released.

HSUS president and CEO Kitty Block says, “For months we have been urging Dow to end the unnecessary test and release the dogs to us. We have gone to considerable lengths to assist the company in doing so, but we simply cannot wait any longer; every single day these caged dogs are being poisoned and are one day closer to being killed.”

Please read our statement in response to the report published today by the Humane Society of the United States. pic.twitter.com/kyNsPlSPzR

The tests conducted by Charles River Laboratories are not illegal in the United States but HSUS wants to help end the practice.

Although research animals are not our focus, Michigan Humane will maintain an open line of communication and share education opportunities with anti-vivisection organizations that share our beliefs and principles.

“Michigan Humane recognizes but opposes the use of animals in research where there are clear alternatives,” Michigan Humane president and CEO Matthew Pepper says. “While we understand the conflict between regulatory mandates and animal welfare, we as a society must move beyond cruel and unnecessary means of research. Suffering at any level cannot be acceptable.”