To Love a Cat…

Earlier this week, we asked readers to share their cat stories with us – to show that cats can be man’s (or woman’s) best friend as well as dogs can! Here are a handful of the responses we received. Keep following the blog for more great kitty stories!

“I have two rescue kitties. Teddy and Charlotte. Both are absolutely awesome. Teddy is a Maine coone and hilarious. He is vocal. Plays fetch and loves to steal things. Carries blankets and articles of clothing in his mouth. He once took a bra out of my niece’s suitcase when she was visiting. Dragged it out into the dining room as we were all eating. It was hysterical. Charlotte is little domestic short hair tabby. Cuddly and my shadow. A bossy vocal gal at treat time. Sleeps under my chin. Snoring the night away. I love them both. Our family will always have cats! – KMJ” 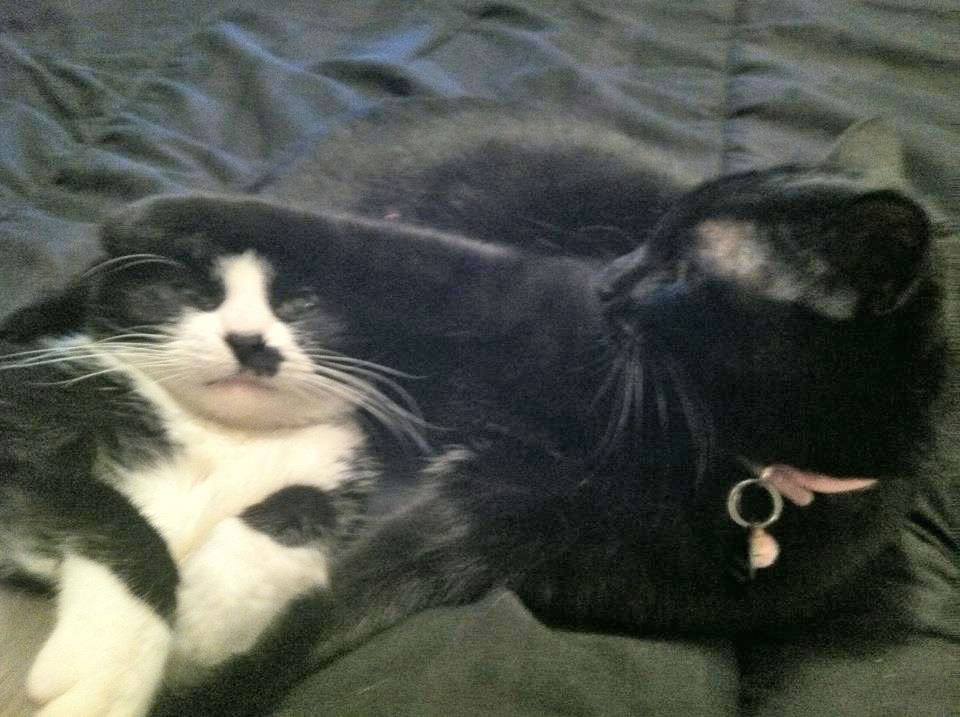 “Both my girls were strays left out in the elements to fend for themselves as kittens. 10 years apart in age, my tuxedo Sneakers was tolerant of our mischievous Black Shadow. We lost our 13 year old Sneaky to liver disease in December. -CB”

“My kitties Simon and Babygirls Greet me every time I leave and come back.
Both at the door waiting to rub my leg. Babygirls is a talker so she meow meow meows when I get home.
Both Always by my side, if I’m on the couch they are. If I’m in the bed they are. If I am in the bathroom-they WANT TO BE lol
Love my best buddies
They love to give head butts too. -LS” 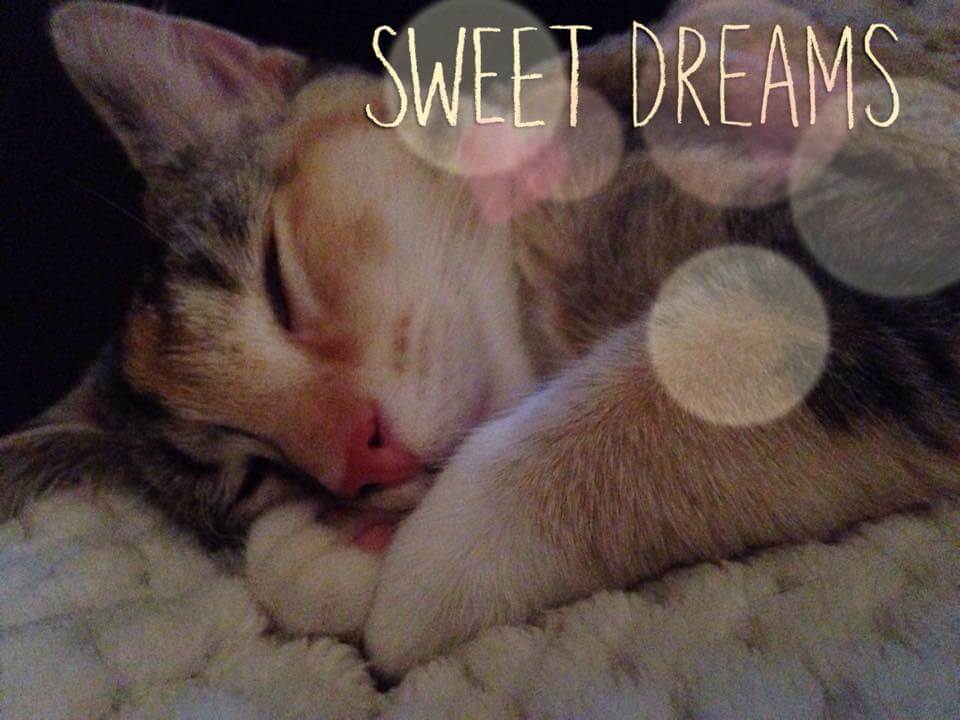 “One cat seemed like enough but Kitten was added to our family this Christmas as a present for the kiddios. I love every little goofball thing she does! -CB”

“My Grandma was not only my grandma but, my best friend. She took care of me when I was young and I took care of her as she got older. Sadly, she passed away August of 2000. I was 20 years old with a very broken heart. I was lost without my best friend. One day in a store parking lot a guy was giving away kittens for free. He approached me and said he had one left. I told him I wasn’t interested and he told me he was just going to let the kitten go in the parking lot. I told him I would take the kitten; he was so little and scared. I took him to petsmart thinking they could take the kitten but of course they’re not a rescue/shelter. So I took the little guy home. I immediately fell in love. My grandma’s last gift to me was this little kitten. I now had something to love and take care of in her place. I named him Cascious:) Cascious will turn 15 this upcoming August. He’s held my paw through it all. I didn’t save Cascious’s life, by far he saved mine. -MAS” 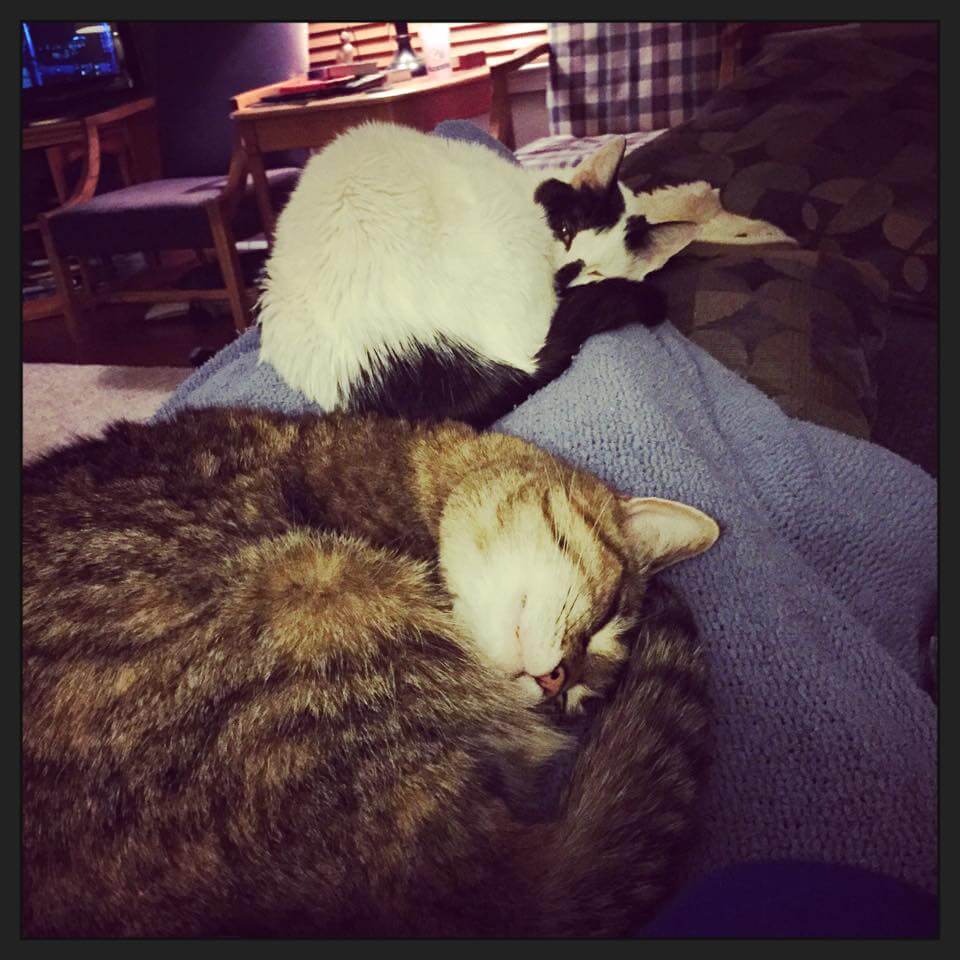 “I adopted both of my kitties. The white and black one is Rudy. He’s almost 16. I got him from the Humane Society at the zoo in ’99. We affectionately (and not so affectionately at times) call him a “Son of a B*tch” because of all the mischief he causes! When he’s not creating havoc in the house, he’s usually curled up a lap–either mine or one of the kids’ laps. Sometimes I have to put him in the basement at night (see above description), but usually, I accept my nightly wake-ups, because, every night, for at least a few hours, he crawls under the covers and sleeps on my legs. The tabby is Shelby. She turned 14 recently. I adopted her as well. She is my baby girl. She’s affectionate, and she has the sweetest little voice, chirping and purring and squeaking. She’s also a lap cat. She usually chooses my husband’s lap, and although he’s not an animal person, I think he secretly likes that she prefers his lap to mine! She’s a little lover, and she sleeps on my legs too–on top of the covers! The two cats are best friends. They squabble at times, but often sleep together, and often on my lap (see photo)! Both cats love our kids too. Shelby loved the kids when they were babies, and tolerated some tail-pulling from both kids. Both animals have added so much value to my life! -JWH”