As Hurricane Harvey battered Southeast Texas, the Houston SPCA began reaching out to animal welfare organizations throughout the United States to the thousands of animals impacted by the deadly storm. On Monday, Sept. 4, the Michigan Humane Society answered the beleaguered agency’s call with a team of nine trained and experienced animal welfare professionals, including a veterinarian, rescuers, first responders, and skilled shelter technicians, and a small fleet of vehicles equipped with significant transport capabilities.

Matt Pepper, MHS President and CEO, is among the team. Equal parts animal advocate and passionate writer, Matt is sharing his experiences by way of regular journal entries. Here are his first three.

Day one was spent on the road.

There was a palpable excitement, mixed with the appropriate level of nerves and anxiety, among the group. The excitement was less about the experience we were about to undertake and more engrained in the possibility that we can make a difference. We all work at the Michigan Humane Society because we have a real impact on the people and pets that we speak for. The magnitude and gravity of this catastrophic event makes any state line or hometown irrelevant. This is about making a difference. Today, and for the next week, the Motor City is Houston, and we are the Houston SPCA.

Today was about contemplating the coming week. It was about developing a connection to this team. It is about what is best about animal welfare and the people who represent it—not just in Houston, not just in Detroit, but throughout the country. I have been inspired since Harvey’s landfall by the accounts of incredible organizations, represented by even more amazing people, from around the country working as one.

While today mostly revolved around the best of us, it was still mixed with some misinformation and internal conflict that, at times, plagues this profession. Social media can be a powerful tool for animal welfare but is too often used to spread chaos and confusion—as is the case with accusations, all false, aimed at the lead agency during this time. This is the true definition of adversity. These are complex issues that require strong leaders.

The Houston SPCA has done an incredible job under the most challenging circumstances. We are proud to work alongside them in support of their efforts to respond to and recover from Hurricane Harvey. If, heaven forbid, an event as destructive ever hits Detroit, I know they, and so many others, will be there. That is what leaders do.

This is an extraordinary time, and it requires extraordinary compassion and commitment. Overwhelmingly, today was about optimism; that we can do something to make a difference. That, after all, is what the Michigan Humane Society does. It is who we are.

The first two days were about anticipation; today was a healthy dose of reality.

Reporting at 8 a.m., we were immediately put to work. Our teams were split into two groups. Dr. Fisher handed the representative from the Houston SPCA his temporary veterinary license and was doing surgery on animals brought in from response teams within a half hour.

Dave McLeod, Myron Golden, Debby MacDonald, and I were assigned to assist in loading animals displaced from Beaumont, Texas, into transport vehicles from the Humane Society of Missouri. We worked alongside a fantastic team from the Atlanta Humane Society. These animals, more than 60, were to be dispersed among veterinary clinics in the greater Houston area, which were going to act as foster homes to give owners time to find their pets. While the weather by Houston standards was mild, mid 80s, sweat was rolling off all of us within minutes.

Once the dogs were loaded and we bid goodbye to the Humane Society of Missouri, it was time to rake up the wood chippings, clean the cages … and set it all up again.

Shortly after finishing, our team, which clearly had technical skills in animal handling that were valuable, was put back to work transferring more challenging dogs into the very annex area we had just cleared and set back up. These dogs were part of a large hoarding case uncovered by a boat patrol during the floods. The dogs were terrified. Of the roughly 40 dogs we transferred, half of them would not take a step and required us to carry them. Only a handful weighed less than 40–50 pounds. They had clearly never been walked on leash nor been handled with any regularity. If there is one good thing to come from today, I hope it is that we were able to provide the first time these dogs had likely experienced any compassion. That is something to be proud of.

At the end of the day, we must have worked with hundreds of dogs, very few of which were not challenging to handle. My knees hurt. My arms hurt. My back hurts. My eyes are heavy. I’m dead tired. But I get to go home in a week.

The reality of Hurricane Harvey really hit home when looking into the eyes of people who selflessly hadn’t taken a moment to think about their own lives for two weeks; these people were giving everything they had to be making a difference. Their own worlds had been turned upside down and yet they still showed up every day for the animals. More than 700 animals were at the shelter today in a variety of conditions; most in desperate need of attention but lucky to find themselves in the hands of the incredible folks at the Houston SPCA. I, and all of us from MHS, am honored to support their efforts.

It is very humbling to think about “what if.” What if this happened in Detroit? Would my view of the situation change? Very likely.

The team from MHS made me very proud today. We were welcomed into the HSPCA family and immediately provided relief to people who desperately needed it. We gave compassion to dogs and cats that had been through a horrific ordeal in their own right. The expertise we brought to Houston through our teams unquestionably enhanced and furthered the efforts on behalf of the animals of Southeast Texas. We pushed ourselves to the limits to have the greatest impact that we could have had on everyone, pet and person, impacted by Hurricane Harvey.

Today I was proud of what we accomplished. Tomorrow, we wake up and do it again.

Today was an incredible experience.

I am overwhelmingly proud of the MHS team. They have conducted themselves so professionally and proficiently that we have all been tasked with more advanced duties and responsibilities.

The field team consisting of Debby MacDonald, Laura Peterson, Dave McLeod, and Myron Golden was assigned to a multi-organizational response to a heavily impacted area to pull 67 dogs and cats from a hoarding case that was identified during the floods. We were led by the HSPCA investigators and accompanied by a team from the Humane Society of Missouri. The roads were barely passable and required creative driving to get to the home where 40 dogs and 27 cats were taken in. Each of the responding agents was covered in sweat and mud, and vehicles were covered in a caked-on layer of dirt and grime. Most importantly, everyone came back safe and satisfied and, needless to say, tired. 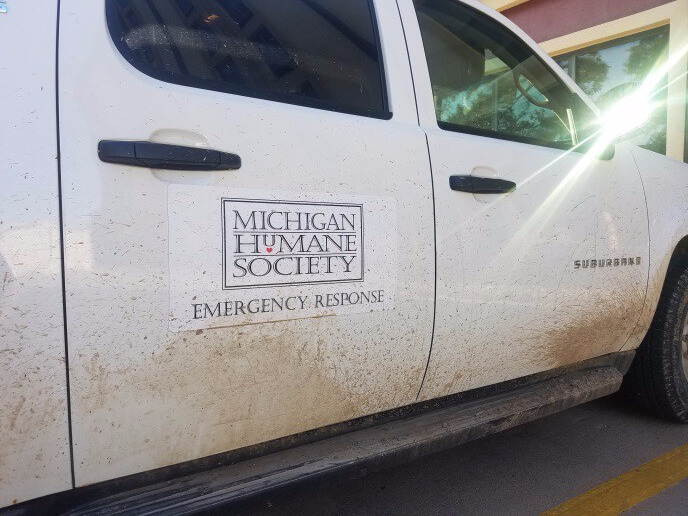 When the convoy returned to the shelter, the process of evaluating the animals was a work of art. Representatives from the SPCALA, Connecticut Humane Society, Atlanta Humane Society, and MJHS working in concert with Houston SPCA staff processed and evaluated all of the animals. It was inspiring to see the efficiency of this group, many of whom have never worked with each other—by seeing it, you would have never known.

Dr. Fisher, who was once again put right to work in surgery, was pulled to provide more advanced medical evaluations of some of the dogs and cats that were worse off. He did not return to the office until almost 9:00 p.m. I’m not sure he had a meal or a break until he sat down after arriving back at the hotel.

Larry Wilhelm and Ann Chrisman were assigned to transport animals to veterinary clinics several hours away.

Our Sprinter, the large-volume transport vehicle so generously donated by an MHS supporter, has been invaluable in getting these dogs and cats to where they have the best chance to be reunited with their owners. These clinics will act as foster homes for the next 45 days while waiting on the hope that owners step forward.

Anna and Larry left shortly after 8 a.m. and did not return until 10 p.m. They have to empty and sanitize the Sprinter to have it ready for the first transport leaving tomorrow at 7 a.m.

Erika Sikora was assigned to the clinic, where she worked as a technician evaluating and processing animals in the overwhelmed facility. She has been asked to do a little of everything and has blown everyone away with her ability to do everything well. She was instrumental as a technician during the evaluation process of the 67 dogs and cats.

Not to be lost on this is Mandy Looney, who has done far more than just document our story. She has spent more time working and sweating alongside us than with a camera in her hand. We are incredibly lucky to have someone who is part of the family, committed to MHS and who we are, and so unbelievably gifted at helping us tell our story.

Their shelter operations and support services lead hasn’t had a day off in weeks. He told me a story of a night shortly after Harvey’s landfall when he was forced to sleep in his office because he simply “couldn’t get home.” My job will be to work alongside him in a leadership role on shelter operations and support services and, within a few days, to give him a much-needed break and take on the role independently for a day or two.

I am humbled to be asked to provide my insight and experience to the task and can only hope to live up to the expectations I have of myself and the faith they have put in me.

I can’t imagine anything more simultaneously emotionally and physically exhausting and exhilarating as today; then again, I said that yesterday. 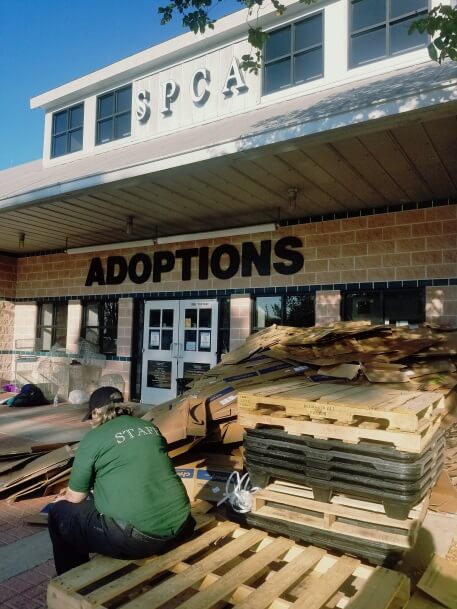