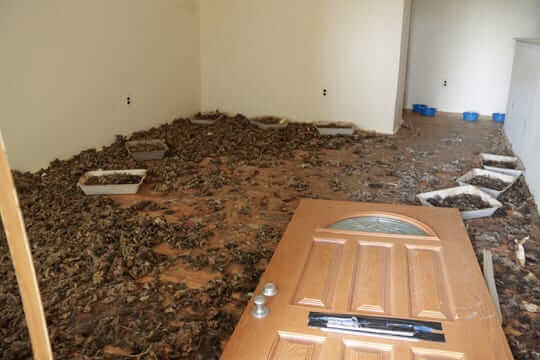 As the Detroit Free Press reports, the cats were living in horrible conditions, which is an understatement. As you can see from the photo above, the cats were literally living in their own feces. Police are still investigating the cat hoarding case and did not confirm if anyone was still living in the house.

The owner of the Garden City home has a history of violations with the city because of having too many animals in the house. According to Garden City authorities, the homeowner corrected every violation by the time a follow-up inspection was made. However, neighbors say the suspect started shielding the windows in February to prevent anyone from looking into the house.

Clearly that’s when things got really bad. Luckily for the cats, concerned citizens sent photos and videos of the cats living in unsanitary conditions to Garden City Police, who then contacted Michigan Humane to help with the rescue. The two agencies secured a search warrant from the Wayne County Prosecutor’s Office and proceeded with the rescue.

The cats were taken to the Mackey Center for Animal Care in Detroit for evaluation by Michigan Humane’s medical staff. The Garden City home has been condemned.