Cat Poking Head Through Ceiling is Watching You 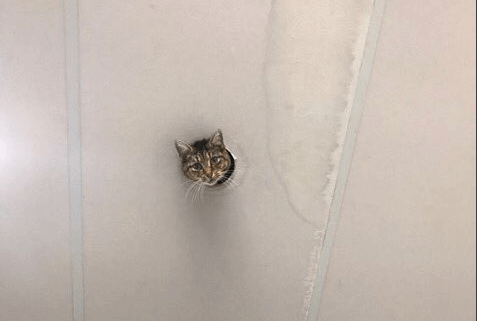 If you were at a particular Animal Welfare League location in Australia, you would have noticed something out of the ordinary. That something would be a cat god staring down at you from the ceiling.

My friend’s mum was at the animal welfare league and apparently there’s a cat that lives in the ceiling pic.twitter.com/jLl84ahuZX

So maybe not a cat god, but as Mashable reports, Emma Campbell of Scotland received photos of the sneaky feline as it stuck its head out of a hole in the ceiling tiles. Campbell told Mashable her friend’s mom snapped the pictures and the staff told her they don’t really know much about the cat either.

“My friend’s mum doesn’t have any information about it, nor does the Animal Welfare League know much about the cat either,” Campbell said. “[…] They do know that the cat gets food and pets but that’s all they know.

“I was told that they leave food up for the cat when they close up their shop each day but they’re not really sure where it came from. So it might just come visit for food.”

The lesson of the story is that you should check your ceiling tiles for any feline deities casually hanging out.