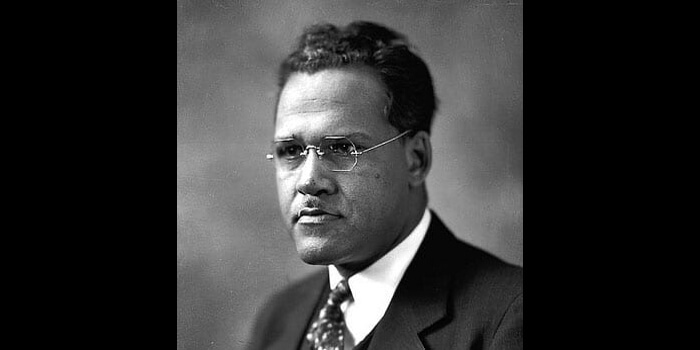 Frederick Douglass Patterson’s impact on animal medical care can be felt to this very day, especially when it comes to the education and careers of Black veterinarians in the United States. He is also the founder of the United Negro College Fund, a philanthropic organization that funds scholarships for Black students and historically black colleges and universities (HBCU).

Patterson was born on October 10, 1901 in Washington, D.C. He was named after abolitionist icon and fellow D.C. resident Frederick Douglass. Patterson became an orphan at just two years old and bounced around between family members until his older sister, Bessie, became his primary caretaker. She was determined that her younger brother was given the best chance to succeed in life and enrolled him in a private elementary school, spending $8 of her $20 monthly salary on tuition.

Bessie’s faith in her brother paid off and Patterson made his education a top priority. By the age of 31, he earned a doctorate of veterinary medicine (1923) and a master of science (1927) from Iowa State, and a doctorate of philosophy from Cornell University in 1932.

Being the only Black person working at Iowa State College’s veterinary clinic, Patterson witnessed how one’s race played a role in society.

Patterson quickly rose through the ranks during his academic career and became the third president of Tuskegee Institute (now Tuskegee University) in 1935, at the age of just 33. He would serve in that same role for nearly 20 years, leaving Tuskegee in 1953. During that time Patterson transformed Tuskegee into a major HBCU. Being a veterinarian, he also founded the institution’s School of Veterinary Medicine, which allowed Black students in the south affordable access to become veterinarians.

Dr. Patterson married Catherine E. Moton, the daughter of the second president of Tuskegee Institute, Robert Russa Moton. The two remained together until Patterson’s death in 1988.