A Note from Matthew Pepper on the State of Animal Welfare 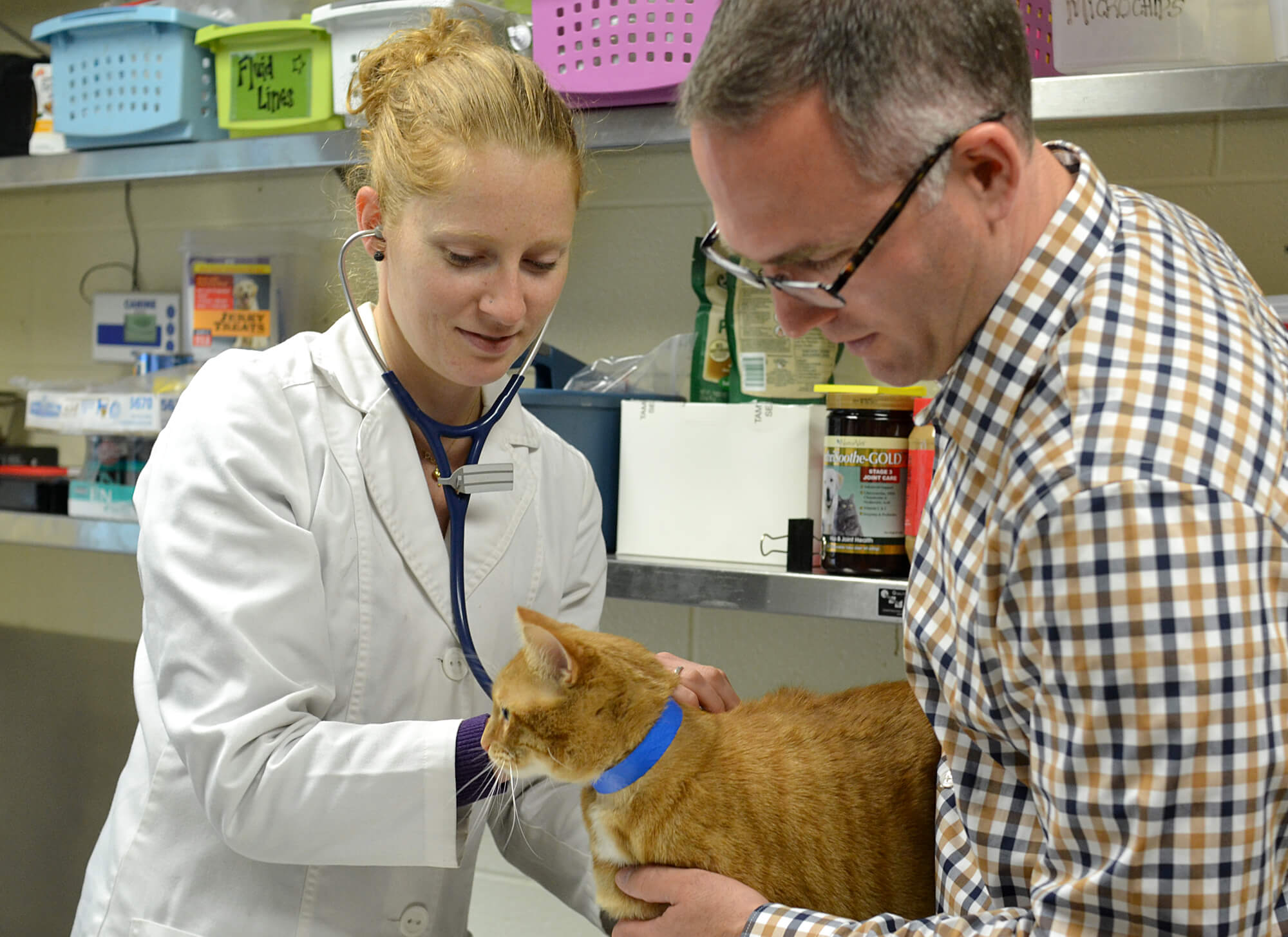 Working together in the animal welfare community allows us to treat more animals and save lives.

“The trouble with the internet is that you never know if the information is genuine.” – Abraham Lincoln

Ok, so obviously this statement didn’t come from Abraham Lincoln, yet no truer words have been spoken. The internet and social media have simultaneously been the best and the worst thing to happen to animal welfare. They have allowed us to reach people with our needs, and more importantly our animals, much more quickly and on a much larger scale. They have also helped to disseminate information and get it into the right hands. Unfortunately, in animal welfare, they have also been used to perpetuate myths about animal shelters and alienate people towards those committed to this critical work. They have been used to oversimplify complicated subjects. They have been, and likely always will be, used to attack animal welfare organizations and individuals, often from across the country often with little or no real merit to the argument. It is easy to sit behind a computer and point out perceived social injustices without ever having actually put any real thought or effort into the subject.

I attended a public meeting a few days ago regarding a potential contract between MHS and a local municipality. We provide sheltering services under contract to many municipalities, primarily in Wayne County. Public meetings can be contemptuous at times; especially when they involve issues people are passionate about – like animals. During this meeting, several people had the chance to speak, and the very real concern – and in some cases the anger in their words – was palpable. The previously-contracted animal welfare organization was unable to reach an agreement to continue providing services. Therefore, the municipality had great interest in partnering with MHS, and the public meeting served, in part, to discuss what our role may be.

Much of the information was entirely inaccurate or gross misinterpretations for show, fed to the citizens by the previous provider. It seemed clearly directed, for whatever reason, at MHS, and it diverted any real attention from the actual issues. Most of these inaccuracies were clearly things that people “heard” or “read on the internet.” Yet, and potentially the most concerning part, is it seems MHS’ partnership with this community may philosophically preclude the previous organization from continuing their work to help those citizens and their animals. Surely, this critical work remains very close to their heart and their mission and their commitment to the animals cannot cease solely because MHS is becoming a significant resource for that community and their animals – right?

Here is an unrelated example easily grabbed from the internet about MHS:

This is just one. The internet and social media are full of hatred and personal jabs about animal welfare organizations and professionals. They are not hard to find given the seemingly divisive nature of our profession.

If we are being honest with ourselves – and, after all, that is really all we can ask – does anyone believe this to be true? Is that really the “reality”? Use this example; do you believe we “kill” rather than treat illness? Of course not. It is irresponsible and illogical to say otherwise. We employ a host of clinical veterinarians and each of our three shelters has a shelter veterinarian in addition to a director of shelter medicine. Of course we treat animals. We do it all the time, with tremendous compassion and expertise and continue to employ measures to do more. At MHS we do not hide our numbers. We do not manipulate our numbers. We philosophically don’t believe in placing animals that may pose a danger to themselves or others and/or have medical issues that they are unlikely to recover from or are causing suffering in some way. Agree or disagree – that does not mean that we do not see every animal we are entrusted with as a life. However, given the very nature of the negativity and anger that can be garnered in, literally, minutes on social media and the nature of a society that is so willing to make judgments in the absence of information, is it so hard to see why some organizations in animal welfare have manipulated numbers? Some manipulate them to continue the facade of perceived life-saving movements that they have become so engrained in that they, right or wrong, can no longer get themselves out – even in the face of clear social need and standards of care issues they are creating.

That brings me to my point. Why? Why do many in animal welfare spend so much effort attacking one another rather than actually collaborating on the issues? I’m sure there have been those in animal welfare who were unproductive and ineffective and, just as likely; there are those who didn’t do enough to save lives. However, in my years of experience, that is unquestionably the exception and not the rule. I have met more amazing people working at shelters and volunteering their time in animal welfare than I can remember; all with clear hearts, compassionate souls and lofty expectations. I have yet to meet one that “kills”.

It is unfortunate that in animal welfare, there can be no discourse where two organizations cannot differ in opinions or philosophies without that difference being born from malicious intent. Too often animal welfare evolves into “animal warfare”. Behavior intended solely to “trash” another organization based on philosophical differences, more often than not perpetuated myths or perceived realities rather than truth, is counterproductive. In truth, counterproductive may not be a strong enough descriptor. This behavior costs lives. In this day and age of social media, I would dare say that more animals have died from the venom emanating from a keyboard than by a needle at the hands of shelters. 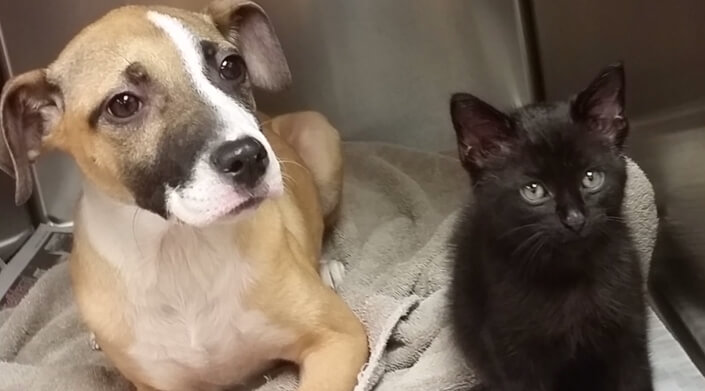 These two were found sharing warmth, cuddled behind a garbage can. If cats and dogs can get along, why can’t the animal welfare community?

Too often, animal welfare organizations choose to spend valuable resources, time and energy simply pointing out where other organizations don’t overlap with their philosophies, rather than focusing on the areas they do and making a real difference. These issues are not one organization’s problem. There is not a formula or equation that will plug into any community and solve all the issues facing animal welfare today. Animal shelters are more than numbers – sheltering solely to meet a number, a percentage, is leaving behind the core value that every animal is a life.

We are surely more equipped to handle the very real issues in animal welfare more adequately together than apart. When we partake in this negative behavior, it is more important to focus on what doesn’t happen rather than what does: No animal is placed into a loving home. No citizen is educated about responsible pet ownership. No animal is rescued from abuse and neglect. No funds are raised to support our collective life-saving programs. What does happen? We are all perceived, through this combative and divisive behavior, to be unproductive, unstable and irrational, regardless of our part.

I have only been in the position of President and CEO of the Michigan Humane Society for two months. That is long enough to know I am a part of an amazing organization providing services to the animals, and the citizens, of southeast Michigan. We are full of staff and volunteers who passionately believe in the value of what we do. Our mission is to save lives. I can, with conviction, say that I am here to make a difference and I believe in what we do. If you accept these principles as truths, which they unquestionably are, then it is logical that our organization’s core philosophies are surely not as different as one may believe.

It is selfish and contrary to all a mission stands for to sit behind a computer and spew hatred in the false belief that you hold the only key to truth. That all difference is born from malicious intent and is therefore somehow evil; to believe that a philosophical difference in one area should entirely prohibit collaboration in one where a real impact can be made. True courage is to look beyond our own pride and work selflessly for the benefit of the animals. Think about what is said and ask yourself: am I helping the animals I care so deeply about?

At MHS, one of our core philosophies is collaboration. Over the years, I’m sure there have been times that we could have done better or worked more diligently in cooperative endeavors. In 137 years, I’m sure we have made some mistakes. That said, we have amazing partnership programs that involve community outreach, more than 100 placement partners, educational and event partners, and general partners in advocacy. We recognize that these are community issues and we cannot do it alone. You will not see MHS take part in the negativity that too often consumes the real issues in animal welfare. You will see us focusing our efforts on making a difference.

The future of animal welfare has to be collaboration and animal welfare organizations must move away from these baseless attacks that draw us away from our core beliefs and values. It is easy to be passionate about animals; however, passion doesn’t always lend the way to logic. Be passionate but do not make noise solely to make noise. Make noise to make a difference. Make it productive. Believe you can make a difference…then do it.

And since we began this note with one great leader of our country (albeit in humor), I do want to end with the words of another great leader who accomplished so much for so many – and not with words but with action.

“It is not the critic who counts; not the man who points out how the strong man stumbles, or where the doer of deeds could have done them better. The credit belongs to the man who is actually in the arena, whose face is marred by dust and sweat and blood; who strives valiantly; who errs, who comes short again and again, because there is no effort without error and shortcoming; but who does actually strive to do the deeds; who knows great enthusiasms, the great devotions; who spends himself in a worthy cause; who at the best knows in the end the triumph of high achievement, and who at the worst, if he fails, at least fails while daring greatly, so that his place shall never be with those cold and timid souls who neither know victory nor defeat.” – Theodore Roosevelt