This is the first installment of a three series piece on “No-Kill” animal sheltering and what it means. You can read the entire piece in a PDF document here. The second installment on the blog will post on Tuesday, January 20. 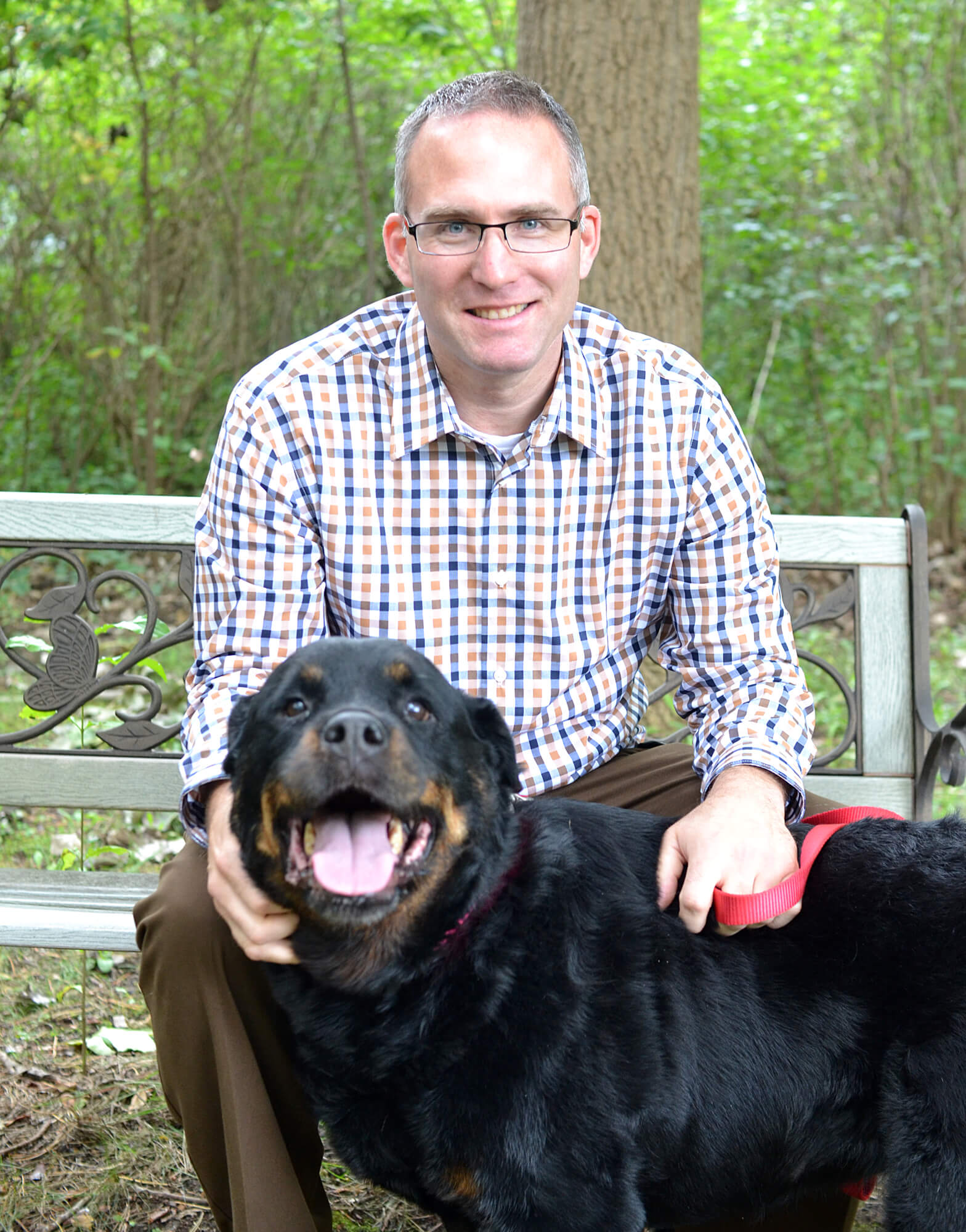 Author Matthew Pepper, with Rhea, a senior Rottweiler that was adopted from MHS.

The Michigan Humane Society (MHS) is often asked, “Are you a no-kill shelter?” – A relevant question, but one without a simple answer.

At MHS, the highest priority is to adopt out every healthy and treatable dog and cat within our care! I am happy to tell you we already accomplished this with all of our healthy animals five years ago! We continue to maintain this amazing work today. I am also proud to tell you that we have just recently (late 2014) achieved 100% placement of our treatable dogs! And MHS is doing this all while taking in more animals than any other organization in the state. While we still have critical work ahead of us to achieve 100% placement of treatable cats (we are currently at 68%), our staff and volunteers are working hard every day to get there.

The goal of adopting/placing every healthy and treatable dog and cat has achieved nearly universal acceptance in animal welfare, as it should. Yet, sadly, this vision – often referred to as “no-kill” – has become more about animosity and anger than anything else. This is enormously unfortunate as “no-kill” is a completely noble cause that encompasses many worthy programs that all shelters, to the extent their resources allow, should employ – including robust adoption initiatives, foster care, subsidized sterilizations, community outreach, behavior modification and keeping pets in good homes. The “no-kill” movement has helped serve as a catalyst of change in focus and leadership. However, it has now, in large part, become a misguided, misinformed caricature of its original vision.

There are countless instances of “no-kill” advocates shouting about the need for collaboration and openness, and then immediately and often viciously attacking the shelters – this is completely counter to the spirit of collaboration and transparency. They attempt to pit shelter against shelter instead of looking at the larger community of animals, which calls for bringing shelters and rescue groups together for the greater good. “No-kill” has oversimplified animal welfare to nothing more than a “save rate,” disregarding all other aspects of animal welfare and responsible sheltering. Important aspects like cruelty investigation, humanely ending animal suffering, legislative protection for animals, public safety, and the wise use of limited resources to help as many animals as possible are neatly sidestepped with such a narrow focus. All the negativity and attacks divert efforts and funds away from the animals in need and actually deter community collaboration. With so many of these attacks happening over the Internet, which is widely accessible and lacks any requirement for accountability, it is a disaster for the animals!

The negativity and attacks are counterproductive. They cost lives.

However, let’s move on from there. 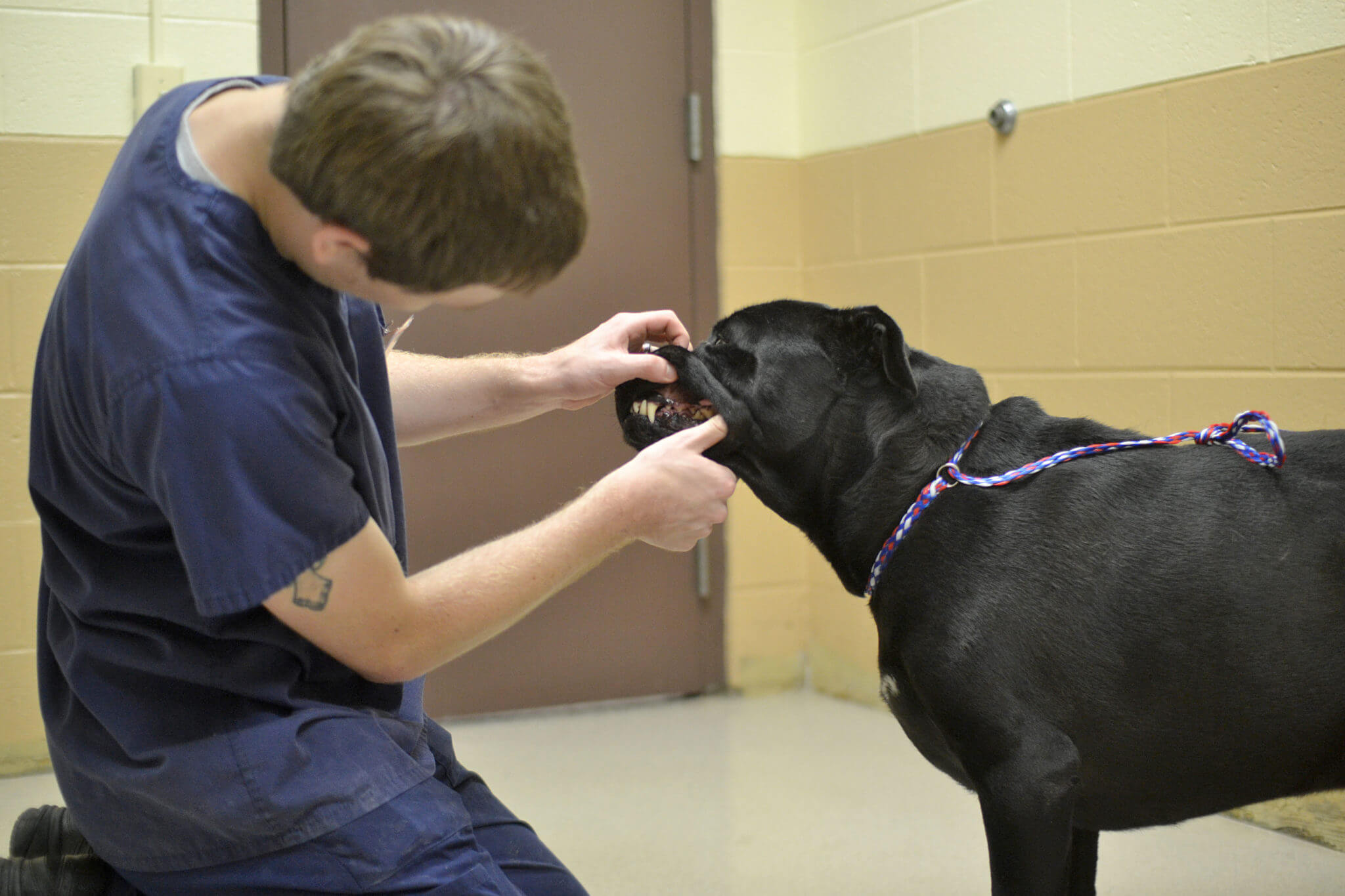 All animals at MHS are evaluated for health and temperament, and classified according to the Asilomar Accords.

First, we have to define “no-kill”. To do so is not quite as easy as it would seem. We have been taught all our lives that “no means no.” But the “no” in “no-kill” is not that simple. Does “no” mean that you don’t ever euthanize animals? Does it mean that you don’t euthanize any healthy or treatable animals? Is there a minimum threshold “save rate” that you must have to be considered “no-kill”, 90% for example? Does that “save rate” only include healthy and treatable animals? Do you have to accept all animals while maintaining these goals? Is it all of the above?

California defines it in law like this: “It is the policy of the state that no adoptable animal should be euthanized if it can be adopted into a suitable home. Adoptable animals include only those animals 8 weeks of age or older that, at or subsequent to the time the animal is impounded or otherwise taken into possession, have manifested no sign of a behavioral or temperamental defect that could pose a health or safety risk or otherwise make the animal unsuitable for placement as a pet, and have manifested no sign of disease, injury, or congenital or hereditary condition that adversely affects the health of the animal or that is likely to adversely affect the animal’s health in the future.” Further it states that, “It is the policy of the state that no treatable animal should be euthanized. A treatable animal shall include any animal that is not adoptable but that could become adoptable with reasonable efforts.”

We must reach a consensus on a definition. It would seem most appropriate to define “no-kill” to mean that there is no euthanasia of healthy or treatable animals, which does align with MHS’ goal and vision.

Let’s think about those animals that are not healthy or treatable.

The Asilomar Accords definitions are the most accepted national standards for decisions on which animals are healthy and treatable and which animals are unhealthy or untreatable. The term “unhealthy/untreatable” is defined as and includes all dogs and cats who at or subsequent to the time they are taken into possession:

1) Have a behavioral or temperamental characteristic that poses a health or safety risk or otherwise makes the animal unsuitable for placement as a pet, and are not likely to become “healthy” or “treatable” even if provided the care typically provided to pets by reasonable and caring pet owners/guardians in the community; or

3) Are under the age of 8 weeks and are not likely to become “healthy” or “treatable,” even if provided the care typically provided to pets by reasonable and caring pet owners/guardians in the community.

An adopter at an MHS “Meet Your Best Friend at the Zoo” event cuddles her new puppy.

The Asliomar Accords provide an appropriate means of identifying and defining healthy and treatable animals; however, these standards are in several ways inherently opposed to the popularly held views of “no-kill.” If “no-kill” is the ending of euthanasia of healthy and treatable animals, how does that relate to having a “save rate” of the total population of animals of 90% or higher? If our goal is simply a 90% overall save rate, regardless of which animals are saved, then we are not valuing each animal as an individual! We end up sheltering towards a number rather than caring with principle for each animal personally. We completely disregard any evaluation of an animal for temperament and health. The focus becomes getting animals out of the shelter in any way possible, as fast as we can! We avoid the more morally challenging question of whether some of those animals should be placed back into the community – and what risks we are putting on others, both humans and animals, if we do so.

Can we simply wash our hands of this responsibility? What if an organization saves every healthy and treatable animal but a quarter of the animals they take are identified as unhealthy/untreatable. Are they “killers”? Can they be “no-kill” with an overall save rate of only 75%? A better question: If that is the definition, solely to save 90% or more, should they call themselves “no-kill” even if they are adopting out untreatable, even dangerous, animals? Animal shelters are more than a number, more than a placement rate, and should be defined by their principles and their achievements together.

Let’s take a look at two hypothetical neighboring shelters. Shelter #1 limits admissions to pets they think they can find homes for relatively easily. Shelter #2 takes in all animals that come to their doors. Let’s say they use the same system of animal evaluation for health and temperament. In Shelter #1, because they limit who they will take to likely adoptable pets, 96% of the animals they take in are healthy or treatable, and they place all of those pets. Shelter #2, because it accepts all needy animals, receives a larger number of unhealthy/untreatable animals (perhaps those turned away from Shelter #1) and therefore only 57% of the animals in their care are healthy or treatable, all of which they adopt out. Both shelters have placed ALL their healthy and treatable animals, but Shelter #1 has a “save rate” of 96% while Shelter#2 has a “save rate” of only 57%. Which is the “better” shelter? Which one is providing more services to the community and the animals we share it with? There answer is clearly much deeper than a simple “save rate.” 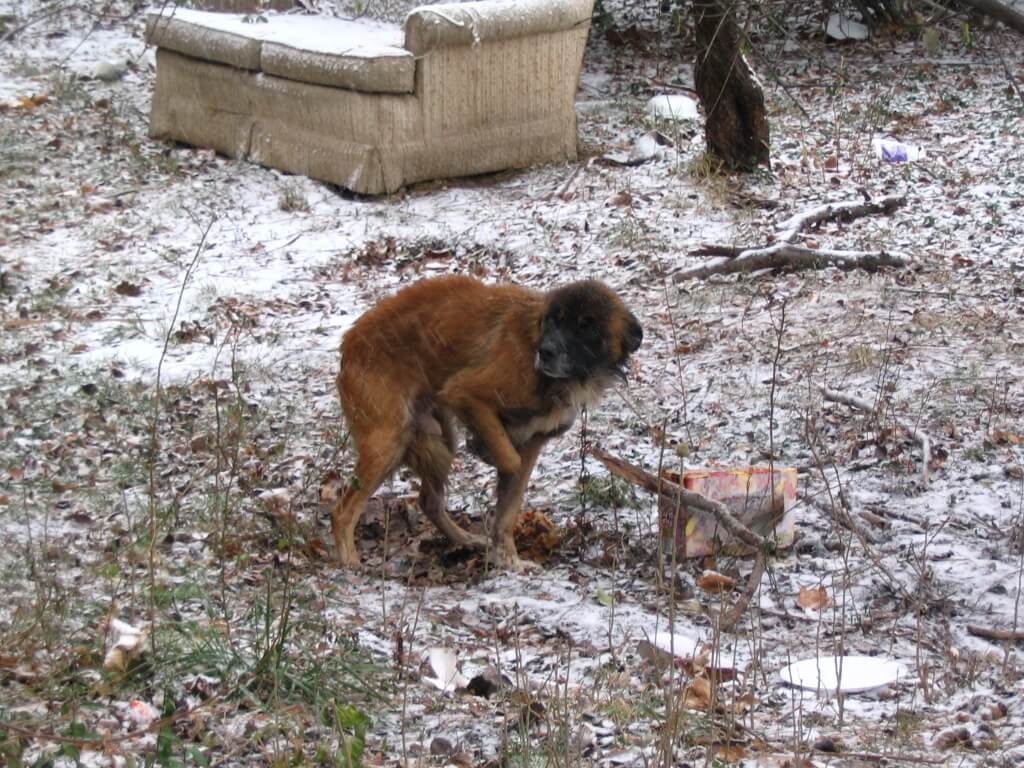 Detroit has a particularly large issue with stray and abandoned dogs due to economic struggle and a high number of abandoned homes.

It is also naïve to assume that every city is the same and therefore the same solutions should apply. The same principles should apply, but cities have huge geographic, social and economic differences. This brings me to Detroit. A good person is a good person and character is character. A good pet owner is a good pet owner regardless of income, ethnicity, political affiliation, etc. Detroit is an amazing city with a great history. However, due to the economic downturn and the significant decrease in population over the past several years, Detroit has large areas of abandoned, neglected and forgotten homes – entire neighborhoods in some cases. In those communities, there are often more dogs and cats (compared to other Michigan communities) that are not socialized and have not received any medical care. No fault of their own. They are a product of their environment and lack of care and unfortunately, in many cases, they are not good candidates for adoption. Does that mean I am making some damning statement on the city of Detroit? Absolutely not. This community is full of spirit and drive. What made it great once also holds the key to its future: the passion of its citizens.

We, MHS, are so confident in the city’s resurgence that we are constructing a new MHS Detroit Animal Care Campus. We are investing in the future of Detroit as we originally did 137 years ago. We believe that Detroit will one day be the model of humanity and compassion towards animals, and we will be there every step of the way. That is the future. However, we cannot ignore the fact that communities are different. The values and principles and goals should be the same; but the factors affecting the animal population in Detroit are different.

Being “no-kill” is often thought of as being right or wrong – an easy “you are ” or “you aren’t” issue. Shelters that aren’t “no-kill” are termed “killers.” People call them heartless. Worthless. They are attacked as having neither the capability, nor the willingness, to care for animals. This is an extremely dangerous assumption.